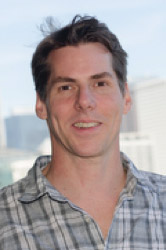 Dave Featherstone’s passing has shocked us all.

He had a unique viewpoint on nearly every topic and was not shy about sharing it. His commitment to his students, graduate and undergraduate, was outstanding and well known. Dave was a broadly trained individual, a neuroscientist that began his career as an artist at Beloit College in Wisconsin before transferring to Iowa State for a BS in Zoology and an MS in Toxicology. His PhD work started at the University of Hawaii, and ended at Utah State following one of his advisors there. After a Postdoc at the University of Utah, Dave and wife Janet Richmond joined our department faculty. The rest is history. In his 15 years at UIC, Dave became one of the most creative and successful scientists and celebrated teachers ever to grace its halls. He was so successful that his older faculty mentor eventually decided it might make more sense to reverse roles, or just have lunch and talk science. Dave also cared deeply about the management of our program and worked creatively and thoughtfully in a variety of administrative roles at UIC. As the Director of the Undergraduate Studies, he worked tirelessly to improve student affairs and our curriculum.

​Dave Featherstone will leave an enormous hole in our department. He will be sorely missed.

Here is the link to his obituary that was published in the Chicago Tribune on February 6, 2017.

Here is the text from the death notice also published in the Chicago Tribune.
Dr. David E. Featherstone, U.I.C. Professor in Biological Sciences, age 50, passed away January 28, 2017. Husband to Dr. Janet Richmond; father to Sam; son to Bruce and Judy; brother to Jeff (Lisa) and Eric; uncle to Georgina, Christopher, Grace, Ian, Gavin, Benjamin, and Jessica; brother-in-law to Paul (Carole) Richmond and Christine (Tim) Noddings; mentor to many, a joy to the family, and a friend to all. Memorial service Saturday, February 4, 2017 at 11:00 a.m. at the Unity on the North Shore Church, 3434 Central Street, Evanston, IL 60201. In lieu of flowers, donations to the family for the David E. Featherstone Scholarship Fund would be appreciated. Info: 773-774-3333

Here is the program from the memorial service held on February 4, 2017.